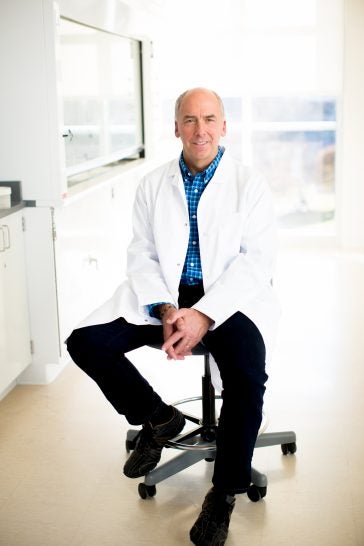 The Hermann Professor of Neuroscience reflects on the serendipity of science, what’s next in his research, and what we still don’t know about exercise.

BILL VAN NOSTRAND WAS a grad student in biochemistry at University of California, Irvine, when he was tasked with isolating and characterizing an unknown enzyme inhibitor. “I was studying this thing, going to meetings and putting up my poster, and nobody would come by and look at it,” he says. “But I was convinced it was likely important in some kind of physiological process, which made me feel it was worth pursuing. You’ve got to find things that motivate you when you’re doing this work.”

Cue vindication. The enzyme inhibitor turned out to be the protein everyone was looking for at the time: the amyloid precursor protein that generates amyloid-beta, which accumulates in the brain in Alzheimer’s. Overnight, the research-no-one-was-interested-in took the spotlight. “It was a very exciting time,” says Van Nostrand. “It underscores the serendipity of science. Much of it is stumbling over things.” The same might be said of Van Nostrand’s move to URI this year –– he wasn’t necessarily looking to leave Stony Brook University in New York when longtime colleague and Ryan Institute Executive Director Paula Grammas reached out to him about potentially joining the faculty. But after visiting URI, he was impressed. “I saw this as a really interesting opportunity. I like the mission behind the Ryan Institute; it’s very focused. And I especially liked the fact there’s a focus on vascular aspects of the disease and inflammation, as well as the role of lifestyle [in disease development and prevention].”

More from Van Nostrand on his research and what’s ahead for him at URI:

Where does your research fit into the Alzheimer’s puzzle?
We’re focused on molecular pathogenesis, why and how amyloid-beta aggregates and accumulates in the blood vessels in the brain, and how it’s linked to cognitive impairment. What we’ve [recently] found is that amyloid around the blood vessels has a different structural signature than the amyloid that accumulates around neural cells. We’re interested in understanding why those differences exist, and whether those differences in structure cause different inflammatory responses. We have some data to suggest that they do. This is a big part of what we’re focusing on for the next four years.

What interests you about this area of research?
This is one of the most exciting and rewarding areas to me because we hope we can use this information for biomarker studies to help in the clinical diagnosis, and eventually for an intervention to stop the disease. There have been a lot of clinical trials on therapies that have tried to interfere with [amyloid-beta] being produced or accumulating, and they’ve all been failures. I think by the time these interventions are done, the stuff has been accumulating in the brain for years. I think it’s targeting too late.

Another part of our work is looking at the glymphatic pathway that flushes toxins from the brain. We’ve been trying to understand how that pathway is impacted by the accumulation of amyloid-beta, or if that pathway starts deteriorating, how it can contribute to its formation. You have to look at all these things in context, all the processes that are occurring, to understand how they feed into neurodegeneration.

Speaking of things that feed into neurodegeneration, part of your research looks at the role of exercise in preventing or slowing dementia. What can you tell us?
A lot of past studies have looked at how exercise affects pathology, but my work with John [Robinson, professor of psychology and Ryan Research Professor of Neuroscience] looks at it as a dose effect. How much exercise is beneficial––is one level of exercise better than another at reducing some of these pathologies or behavioral impairments we see? That’s a question that hasn’t been answered.

How close do you think we are to finding a cure for Alzheimer’s?
What we know now feels very far forward [from where we were]. The more we all delve into this disease, the more we recognize its complexity. Why Alzheimer’s happens in one person may not be the same reason it happens in another person. It could involve [glymphatic] clearance, there could be environmental factors that contribute, there could be vascular factors that affect the way your blood flows to the brain, or in rare cases, there could be genetic mutations  … It’s not A, B, C, and that’s why it becomes difficult to understand. Going forward, we’ll probably find that it’s a combination of therapies, addressing different aspects of the disease, that proves most successful.

But we’ll also find that we can reduce our risk. Eat right, don’t smoke, get your sleep, keep your mind and body stimulated. My father passed away from Alzheimer’s, and it’s a very bleak disease. The most important thing you can do is adopt a healthy lifestyle. It’s no guarantee, but if you can delay onset or reduce the severity or buy years of quality time, that makes a big impact.