STUDY
Tech Support for Parkinson’s Nutrition
A study is underway at URI to assess how technology could help people with Parkinson’s disease and their caregivers more easily access relevant nutrition information. 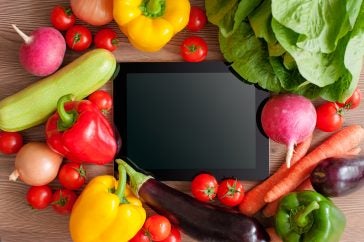 “NUTRITION ISN’T USUALLY included in the care plan for Parkinson’s until the end of disease progression,” says Dara LoBuono, a Ph.D. candidate in nutrition and food sciences at URI. “For example, when a patient needs tube feeding.” But side effects experienced by people with Parkinson’s disease, both from the disease itself and from the medications used to treat it, often affect the desire and ability to eat—and in turn, nutrition.

To help guide people with Parkinson’s in healthy eating, the Lipid Lab at URI recently began a new study to determine how technology—such as social media forums for sharing tips and recipes, or Skype sessions with a nutritionist—might help support dietary interventions and nutrition management for people with Parkinson’s. Study coordinator LoBuono is conducting the research alongside principal investigator Ingrid Lofgren, an associate professor in nutrition and food sciences.

“People with Parkinson’s can experience constipation, decreased appetite or binge eating, weight loss, changes in taste, difficulty swallowing, and other side effects that end up playing a role in their food choices or make it difficult to manage proper nutrition,” LoBuono says. She notes, for example, that a person on a pureed diet may develop a tendency toward ice cream and mashed potatoes, while someone who loses their ability to detect thirst could become at risk for dehydration.  In addition, diet can have an impact on certain medications—such as the way carbidopa-levodopa, commonly used in Parkinson’s treatment,  is absorbed less effectively if taken in conjunction with too much protein. “Managing nutrition can become challenging, especially for the caregiver who handles all the cooking and grocery shopping,” says LoBuono.

The team was inspired to find a solution that would make it easier for people with Parkinson’s and caregivers to keep up with nutrition information relevant to their needs, without adding additional demands on their time. “A lot of Parkinson’s treatments, such as speech therapy or physical therapy, are effective but time-consuming. Someone may go to therapy multiple days a week, plus have ‘homework’ or need to continue with maintenance exercises after training, on top of their doctor’s appointments,” says LoBuono. “We wanted to find out what caregivers and people with Parkinson’s disease already know about nutrition, and how they access that information, as well as their willingness to use technology, so that we can understand how better to support their needs.”

The study, “Tailoring Digital Health to Improve the Nutrition and Health of People with Parkinson’s Disease and Their Caregivers,” is currently enrolling people with Parkinson’s in tandem with their caregivers for a series of four assessments (one in person, and three by phone) that include interviews about diet, exercise, digital competence, and disease burden. Participants will complete two 24-hour dietary recalls, detailed logs of food and beverages consumed in a 24-hour period. At the conclusion of the four sessions, each participant receives tailored dietary recommendations from a registered dietitian, based on their assessment data.

Ultimately, the study will help inform nutrition interventions that can improve the health trajectory of people with Parkinson’s. “The Parkinson’s community is a really motivated group of people,” says LoBuono. “They have a lot of interest in learning changes they can make to improve diet and health, and it’s rewarding to be part of that.”