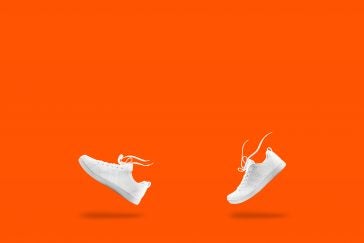 [UPDATE: This study was completed in December 2019 and is no longer accepting new participants.] Smaller steps and gestures, slower pace, trouble with balance: Parkinson’s disease is often characterized by movement that becomes increasingly limited as the disease progresses. One physical therapy program––known as LSVT BIG––has helped people with Parkinson’s regain lost functionality. But despite the program’s fairly widespread use and anecdotal evidence of its success, there is still only limited data to measure its effectiveness.

Physical therapist Christine Clarkin, a Ph.D. candidate in URI’s interdisciplinary neuroscience program, is working to contribute to the existing research. With support of a student grant from LSVT Global, she recently began an efficacy study at URI to evaluate the four-week treatment intervention, designed to increase mobility and quality of life for people with Parkinson’s. (Clarkin has also recruited the help of Morgan McKenney and Brianna O’Grady, who are both physical therapy Ph.D. candidates at the University. She will be guided by principal investigator and Associate Professor of Communicative Disorders Leslie Mahler.)

The BIG idea
LSVT BIG is something of a “sister” therapy to LSVT LOUD, a well-known therapy to help people with Parkinson’s disease reclaim vocal power and clarity of speech often impacted by the illness. The acronym stands for Lee Silverman Voice Treatment, named after the patient for whom it was originally developed. Just as LSVT LOUD works to restore the movements and sensory awareness required for projecting the voice and speaking at “natural” volume, LSVT BIG addresses the small and large motor movements needed for daily function.

As an example, Clarkin conjures a night out at the movies. “Think of everything you do when you go to a movie: getting out of the car, balancing popcorn and soda, crawling over people or side-stepping down the row, taking off your coat, sitting down,” she says. Each of these involves various forms of movement, whether large-scale motor tasks like pushing yourself up out of a car seat or the small-motor tasks of taking money out of a wallet. “They’re things we take for granted, but for a person with Parkinson’s disease, they are difficult.”

The LSVT BIG treatment can help bring back lost functionality by focusing on exercises that target these large- and small-scale motor functions and help the brain “recalibrate” the way it perceives movement. In other words, it isn’t that a person with Parkinson’s can’t walk at their usual speed, but that there is a mismatch between the actual motion and what the brain registers as happening. Through a combination of repetition and progressively more challenging exercises, LSVT BIG can help to reconcile this mismatch.

About the study
The URI study, currently underway, seeks to recruit 10 participants for the four-week program, which involves completing a set of exercises twice a day. In addition to measuring improvement in functionality, the study will also measure brain-derived neurotrophic factor (a protein that helps maintain and create new neurons) to help better understand how the treatment intervention affects the body physically. Additionally, Clarkin will equip participants with wearable “Fitbit” devices to evaluate whether this technology could help provide feedback to clinicians and people with Parkinson’s on their progress throughout an LSVT BIG program.

People who participate in the study can expect to see improvement in their functionality. “It’s reasonable to expect progress,” Clarkin says. She adds that treatment can be effective at all stages of the disease, whether potentially helping to prevent or slow progression in early stages or restore function in later stages. “We know that exercise has neuroprotective factors. It’s like brain food.”

For information about the study, contact Clarkin directly at 401-662-5367. [UPDATE: This study was completed in December 2019 and is no longer accepting new participants.]