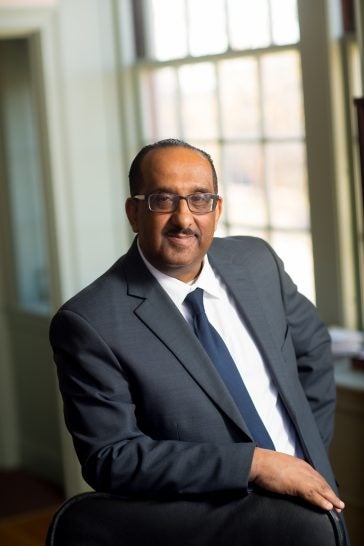 Professor Nasser Zawia on “the critical window” during brain development, why minority populations are more vulnerable to Alzheimer’s, and the secret to staying motivated.

AS A KID, PROFESSOR NASSER ZAWIA wondered endlessly about the big questions: the history of the universe, human existence, and life as we know it—an ongoing fascination that eventually led him to study the brain. When his research as a toxicologist led him toward investigating the developmental impacts of lead exposure, Zawia became interested in Alzheimer’s disease, and again looked to the bigger picture.

“A lot of diseases can be traced back to early life, and I was interested to look at Alzheimer’s disease across the whole lifespan,” says Zawia. “There was very little work being done in epigenetics at the time, but the random and sporadic nature of Alzheimer’s suggested that environment—nutrition, exposure to toxins, lifestyle—plays a major role.”

A leader in brain epigenetics (the study of how, when, and why combinations of genes are turned on and off, determining everything from your physical traits to your ability to stay healthy), Zawia was among the first to show how early-life exposure to lead may be connected to the development of Alzheimer’s dementia. “When other tissues or organs are impacted by chemicals or toxins, the cells turn over,” says Zawia. “But if your brain cells are impacted during development, you can permanently reprogram gene expression.”

You were originally trained as a toxicologist, but Alzheimer’s and neurodegenerative diseases have become a meaningful issue for you. Why?
I was always very curious about memory and learning, and I wanted to study that. But, as a social justice activist, I felt a drive to help the people who are disproportionately affected by the disease. Inner city, poor, and minority populations are more vulnerable—because of exposure to environmental toxins, higher rates of diabetes (which are linked to Alzheimer’s), and the difference in health care they receive.

Why is there a link between early-life exposure to toxins and neurodegenerative diseases like Alzheimer’s?
There is minimal cell renewal in the brain. For the most part, you get your set of neurons for a lifetime. There is a critical window during development where, if you’re exposed to oxidative stress or opioids or malnutrition or a toxin like lead, it can reprogram your genes.

Our work was the first to show scientific evidence that lead can reprogram your genome to elevate your risk factors later in life. We were able to show not only biomarkers changing, but also the pathology in our models getting worse—enhanced plaques and tangles, cognitive problems, behavioral changes, the complete story.

You’re awaiting the green light on a clinical study for progressive supranuclear palsy (a rare, rapidly-progressing brain disorder that has similar symptoms to Parkinson’s disease). What can you say now?
Most of the failed drug trials to date have been focused on intervention at the last stage of disease. Our drug—a repurposed anti-inflammatory drug that is approved in Europe as a migraine treatment and granted FDA orphan status in the U.S.—intervenes upstream to stop the ability to turn on the genes that produce tau (a protein that has been implicated in neurodegenerative diseases).

I think the drug will work in terms of lowering  the disease biomarkers. Whether we’ll be able to see a detectable benefit, that worries me, but I’m optimistic.

Scientific research moves slowly. What keeps you motivated?
If you work on the brain, you will never be bored. We will never solve the mystery of the brain. You may lose money or funding, but you don’t lose motivation when you love what you do.

Nasser Zawia, Ph.D. is a professor of biomedical and pharmaceutical sciences and dean of the Graduate School at URI, as well as Ryan Research Professor of Neuroscience. As founding director of the Interdisciplinary Neuroscience Program, he played a key role in bringing neuroscience to URI.  Read more about his work here.