NEW FACULTY
Cytoskeleton Keys | October 2019
Claudia Fallini, Ph.D. is investigating a critical gateway that may provide clues into the causes of ALS.

In the mystery of amyotrophic lateral sclerosis (ALS), Claudia Fallini is looking to connect some dots.

In recent years, researchers have found potential clues to the puzzling and fatal disease, which causes the progressive breakdown and death of motor neurons, the nerve cells that control all voluntary movement, including breathing, chewing, and swallowing. While various pathways and gene mutations have been linked to ALS, recent studies have also zeroed in on dysfunction in nucleocytoplasmic transport—the system by which essential molecules pass between a cell nucleus and the cytoplasm to perform vital functions—as playing a potential role in the disease. But it still remains unclear how the disease develops and progresses.

Fallini, who joined URI this fall as an assistant professor of cell and molecular biology and a Ryan Institute research assistant professor of neuroscience, wonders if there is a link to be found among these seemingly random clues. “A number of genes and pathways have been identified as causative to ALS, but they all belong to different functional groups,” says Fallini. “I’m trying to understand if there is a connection between them. Is one piece of the puzzle defective, and then it causes the others to fall apart?”

Fallini’s current work investigates one possible key: the cytoskeleton, which provides the cell’s shape and structure—an important factor when you consider that motor neurons in the spinal cord can have axons that are more than three feet in length. Among key players that interact with that cytoskeleton, Fallini points to a lesser-studied but emerging point of interest, the nuclear pore, which helps to control nucleocytoplasmic transport. “Envision a beach ball, sitting inside a cell, kept in place by the cytoskeleton,” says Fallini. “That beach ball is the nucleus, which houses genes that store instructions for cell function. Outside that beach ball is the cytoplasm, the rest of the cell. Now picture a valve in the beach ball, where things can get in and out.”

This “valve” is the nuclear pore, a gateway through which essential molecules can be imported or exported between nucleus and cytoplasm to relay instructions and carry out functions. Rather than just one valve, the “beach ball” of the nucleus has many nuclear pores––and Fallini questions whether interaction between these critical gateways and the cytoskeleton could be a central factor to the disease.

In August, she published research in Nature Communications showing that mutant PFN1, a gene mutation linked to ALS, causes defects in the nuclear pore. “Those defects cause consequences in other essential processes,” says Fallini. One such process is RNA regulation, which controls the ability of “messenger” molecules to translate genetic instructions—a pathway that has been previously linked to ALS. “We tend to think of disease progression as a straight line, but instead it is more like a cycle,” Fallini says. “The first injury causes downstream consequences that feed back to the first injury and drive more negative consequences.”

Interestingly, her research points to a possible hero: the cytoskeletal protein actin, which helps to support a nuclear pore’s integrity and function. In recent work, Fallini shows that actin-nucleus interaction can be modulated to protect the stability of the nuclear pore complex and even fix some of the damage caused by ALS-causative mutations—which could also mean that genetic or pharmacological manipulation of this interaction might be a potential way to help treat the disease. “If you can modulate actin to repair defects caused in the nuclear pore, could it also rescue the motor neuron and prolong its survival?” asks Fallini. “That’s the next step.” 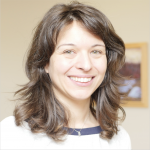 What intrigues her about her work: I’m a person who likes to see things. Cell biology is very visual. You can actually see the inner workings of the cell and how things interact. There is still so much to discover and learn about all our different cells, their different morphologies and unique functions. It’s really fascinating to me.

What’s next in her research: First, I want to try to better understand how actin interacts with the nucleus and what are the cellular players in that interaction. Second, I’m interested in exploring the downstream pathways that lead to neuronal death. Third, I want to pursue this idea of actin-modulatory therapy to see if it can rescue motor neuron survival in genetic and sporadic forms of ALS.

Why she joined the Ryan Institute: Sometimes people get lost in the details of studying these disease mechanisms and lose track of the purpose and the why. I liked the Ryan Institute’s therapeutic focus. There is no cure for ALS, and nothing to improve someone’s chance for survival. I want to apply my research to try to help people who have this disease.

Claudia Fallini, Ph.D. joined URI from UMass School of Medicine, where she was an assistant professor in the department of neurology. Prior to UMass, she was a postdoctorate researcher in the department of cell biology at Emory University School of Medicine in Atlanta, Georgia. She earned her degrees in medical biotechnology and molecular medicine at Universita degli Studi in Milan, Italy.